I'd like to clarify that for this work I'm assuming I've access to OpenCL accelerated Rescue Prime Hash function merge(digest_0, digest_1), which takes two Rescue Prime digests and produces single Rescue Prime digest. For reference you should check out this OpenCL kernel, which exactly does that. With this, I can say following Merkle Tree construction technique can be generalised to other cryptographic hash functions offering acceptable security and collision resistance, where two hash digests of respective hash function can be supplied as input and it produces another hash digest as output. Say for example in Blake3, two hash digests can be flattened into a byte array which is supplied to Blake3 hasher for producing digest. For this work I'm going to use aforementioned prime field F(264 - 232 + 1), so each element of prime field can be represented in native 64-bit unsigned integer i.e. uint64_t. Input to Rescue Prime hash's merge function is 512-bit which is interpreted as 8 prime field elements or more specifically two Rescue Prime hash digests placed next to each other, each of width 256-bit ( read 4 prime field elements ). Output of Rescue Prime hash function i.e. digest is of width 4 field elements, which takes 256-bit to represent. 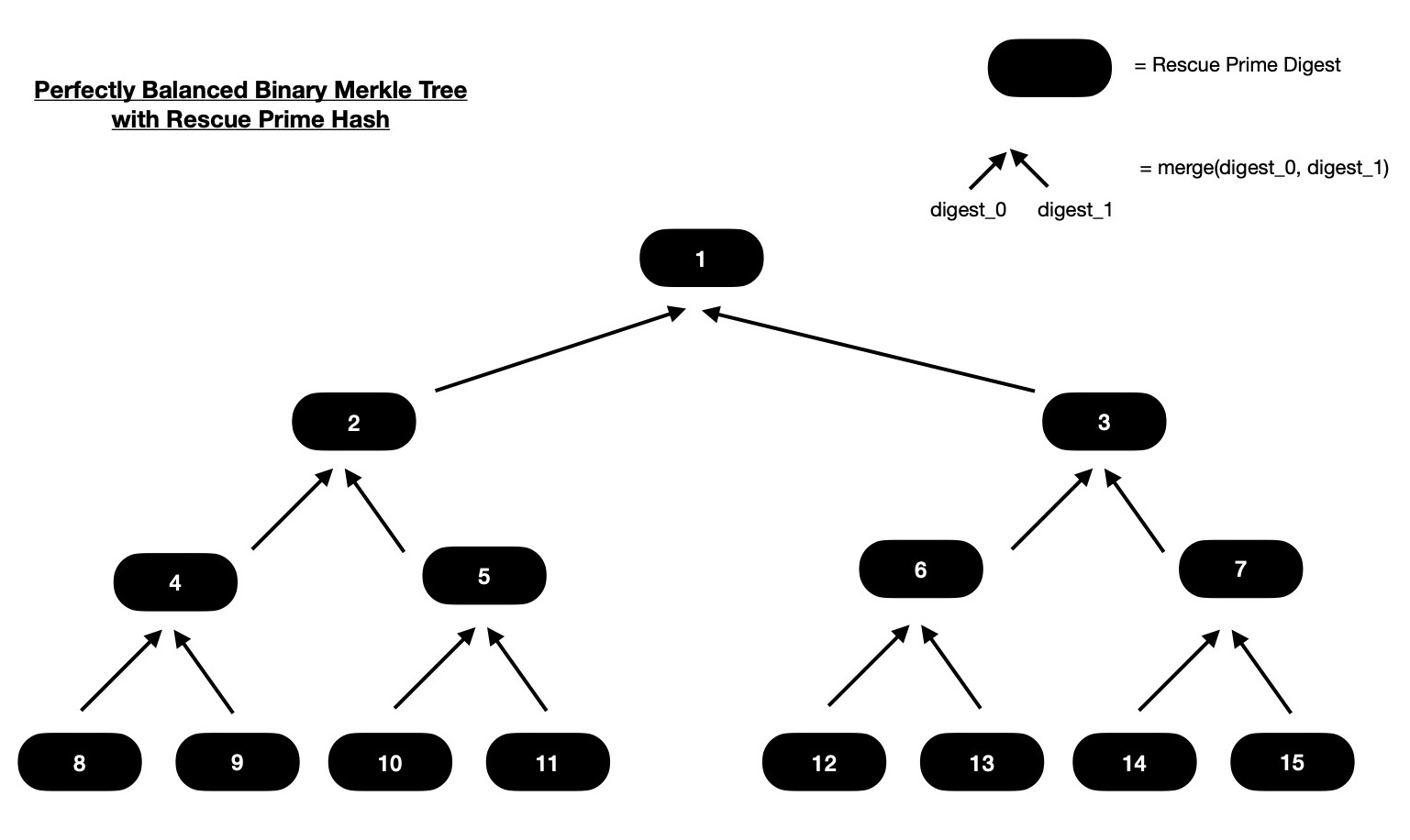 First I'll pair consequtive elements in input array of length N and compute Rescue Prime Hash ( read merge(digest_0, digest_1) function ) for each pair. This should give me (N >> 1)-many intermediate nodes, who live just above leaf nodes.

Notice only 2nd element of output array is non-computed still, which is root of Merkle tree we're computing. Root of tree is nothing but digest of two immediate subtrees. It can be computed as below. This way I've computed ((N >> 1) + (N >> 2) + (N >> 3)) -many intermediate nodes of Merkle Tree, in log2N rounds.

For N-many leaves provided as input to one OpenCL kernel, in log2N rounds total (N - 1) -many intermediate nodes to be computed. Each of these rounds can safely run in-parallel but round k is data dependent on round (k - 1). Intermediate nodes computed during round k are used as input during dispatch of round (k + 1). That means OpenCL event based dispatched kernel dependency management is required so that compute dependency graph can be inferred by OpenCL runtime and no data race happens.

In OpenCL, I'll pass input array of length N as an OpenCL buffer ( read cl_mem ) to kernel, which computes intermediate nodes of Merkle Tree. Output array which is also passed as an OpenCL buffer, is also of length N, where first element will be kept empty and it'll never be touched ( read accessed ) by any dispatched kernels. Though output buffer is of length N, all (N - 1) -many intermediate nodes can't be computed in a single dispatch. Total log2N -many dispatches will be required.

Note, size of output buffer region used for input is always twice the size of subbuffer used for writing intermediate nodes computed during that round. It can be trivially figured out due to the fact that each call to merge function merges two chidren nodes into single parent node.

Let me take a diagrammatic example for better demonstration purposes.

I allocate two OpenCL buffers on target compute device, one for storing input digests, representing leaves of tree and another one for storing all computed intermediate digests of Merkle Tree. These two buffers are supplied to Merkle Tree construction kernel. There will be other inputs required which are hash function specific and I'm skipping them now. To be more specific in Rescue Prime hash function it needs to have read-only access to MDS matrix, Round Key constants, to be applied on hash state during Rescue Permutation rounds.

I'm going to demonstrate construction of Merkle Tree with 32 leaves, so there'll be 5 rounds i.e. 5 kernel dispatches will be required. And these 5 dispatched kernels are to be executed in-order due to inherent data dependency in hierarchical structure of binary Merkle Tree.

In second round of kernel dispatch, original output buffer of length N ( = 32, here ) is splitted into two non-overlapping regions i.e. subbuffers. Previous round's output subbuffer region is accessed in read-only mode this time and marked portion of output buffer is accessed as write-only subbuffer where this round's computed digests ( read intermediate nodes ) are written, which are going to be accessed in read-only mode during next kernel dispatch round.

In this round, 3rd round's output subbuffer region is accessed in read-only mode for computing 2 intermediate nodes, which are root nodes of immediate subtrees of Merkle Root. Note, Merkle Root is yet to be computed and placed at index 1 of output buffer, which is why it's shown as empty in following diagram.

And finally in round 5 of kernel dispatch, root of Merkle Tree is computed by accessing two intermediate nodes, computed during round 4, which are Merkle Root's immediate subtree roots.

With this our OpenCL kernel has computed all intermediate nodes ( 31 in number ) of Merkle Tree with 32 leaves, in 5 consequtive rounds, where each round safely executed in parallel.

This is time to clarify how much memory does it actually consume to store 32 abstractly represented cells in input/ output buffer. Each cell is abstract representation of one Rescue Prime digest which is 256-bit in width or in other words 4 contiguous prime field elements, where each element can be represented using u64. Total of 32 * 256 -bit = 1024 bytes of memory is allocated for each of input and output buffer. Now remember, I had to split original output buffer into non-overlapping subbuffer regions for read-only and write-only access during several kernel dispatch rounds, which is fine as long as subbuffer's origin ( in terms of bytes ) is properly aligned with OpenCL device's base address alignment requirement. For more info you should look at Khronos OpenCL man page here and search for error code CL_MISALIGNED_SUB_BUFFER_OFFSET.

We're interested in Alignment of base address field, but there're two of them because two devices are available in my system. As I'm planning to run this kernel on Nvidia Tesla V100 GPGPU, which is enlisted first when clinfo is run, I'll just consider following from above output.

This means I can't create a subbuffer from whole output buffer when origin of subbuffer is not aligned to 512 bytes. To be more specific, I can't create one subbuffer which originates at some byte index that can't be evenly divided by 512. Let's now go back to previous demonstration, where I constructed a Merkle Tree from 32 leaves, and explore deeply to ensure that all kernel dispatches will execute as envisioned.

And here it all breaks ! Looks like I can't create subbuffer region in second round, because output subbuffer of second round is not properly aligned with Nvidia Tesla V100 base memory address alignment requirement ( because 256 % 512 != 0 )

That means, as I was planning to dispatch kernel 5 times with different non-overlapping subbuffer regions, to be used as input/ output for that round, I can't do that. And as an alternative I've to compute some intermediate nodes sequentially. I showed I have to stop after round 1 kernel dispatch in above case and there're still 15 more intermediate nodes to compute. I write one kernel where only one OpenCL work-item computes all remaining intermediate nodes at tip of Merkle Tree by iteratively going through them in order. In order to avoid device-to-host data transfer when whole Merkle Tree is not yet constructed, I have to use sequential implementation of kernel. For different OpenCL devices, different memory alignment requirement may exist, so portable host-side orchestrator code can't hard-code how many of intermediate nodes at tip of Merkle Tree to be computed sequentially. I suggest you take a look at my implementation of that, which I'm going to link at end.

An optimization experiment --- one can attempt to do data transfer to host and compute remaining intermediate nodes in parallel ( as I primarily proposed ) on host itself where memory base address alignment issues are absent because pointer arithmetics can be comfortably used for accessing subregions of whole array, allocated on host for holding all intermediate nodes ( either computed/ to be computed ).

This is the kernel I wrote for sequentially computing tip of Merkle Tree.

In coming days, I'd like to explain implementation details of SIMD powered Rescue Prime Hash function.