This week I was exploring how parallelism can be incorporated into decoding of Random Linear Network Codes ? During decoding of RLNC coded pieces it's required to invert one N x N coding coefficient matrix, where N = #-of pieces coded together i.e. generation size. And matrix inversion is quite expensive O(N ** 3), which is why I'm interested in implementing faster decoding algorithm in kodr, a RLNC library I've started writing sometime ago. Currently implemented decoding technique works in progressive mode i.e. as soon as a new coded piece is received, decoder attempts to compute Reduced Row Echelon Form of updated matrix ( read considering new coded piece ), which keeps pieces partially decoded. When N-th linearly independent piece is received last iteration of RREF calculation decodes whole data matrix & original pieces are revealed. This scheme works fine, but works in single threaded mode. So I'm looking for scheme which allows leveraging multiple CPU cores while decoding pieces, which are coded with large generation size ( read N is high ). As soon as generation size goes beyond 64, decoding speed starts to fall down very fast. I've found literatures around parallelization of RLNC decoding which also works in progressive mode i.e. decoder doesn't need to wait for receiving all of N-many coded pieces before it can start decoding those pieces. 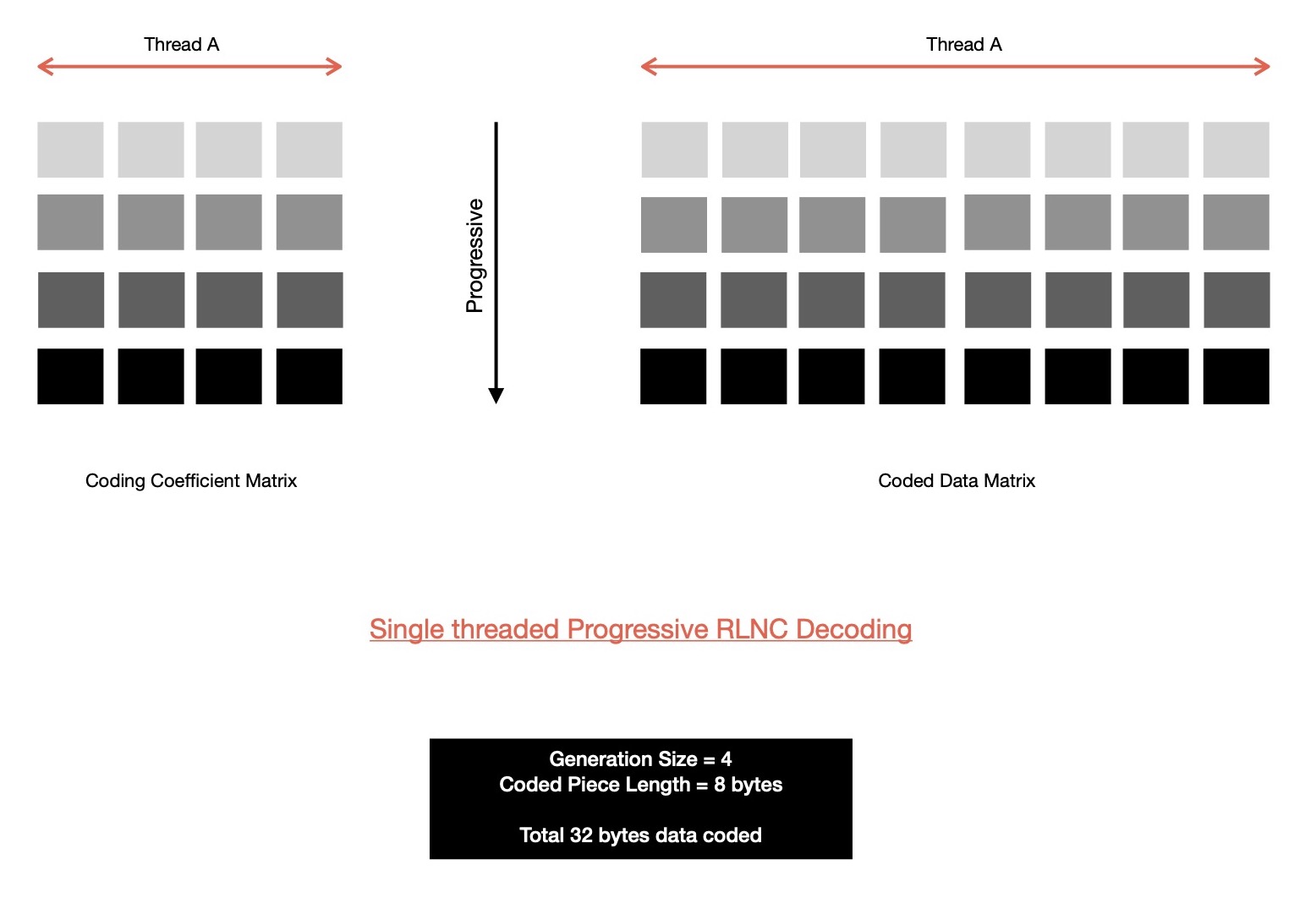 Let me extend this idea of operating on coding coefficient matrix & coded data matrix with two different threads of execution and employ > 1 worker threads, replicating elementary row operations on M-many non-overlapping set of columns of coded data matrix, given M-many worker threads are involved. Essentially coded data matrix is vertically splitted into M-many sub matrices of dimension K x ( piece-length / M ), where K = #-of coded pieces received till now & K <= N ( = generation size ). Then M-many threads asynchronously replicate row operations on non-overlapping submatrices, without using any concurrency control mechanism --- no slow down due to lock contention. Thread which works on coding coefficient matrix is called supervisor thread, inspecting coding vector of newly arrived coded pieces, determining whether linearly independent or not etc. . Supervisor thread performs some elementary row operations on coding coefficient matrix, which are placed in worker queue in order, as those are to be replicated in coded data matrix. M-many worker threads keep listening for messages from supervisor thread for new enqueued work to be replicated in respective submatrix, it's responsible for managing. Worker threads don't need to synchronize their actions, they all work in their own pace --- further making model affordable. After N-many linearly independent coded pieces are received, before decoded data can be consumed, it must be checked with M-many workers, whether they all have finished their pending works from worker queue or not. It may happen that not all of those M-many workers are completely done with executing row operations from worker queue & consumer end up reading still un-decoded data, which will be decoded in sometime future as soon as that/ those worker thread(s) complete their pending worklist. It may lead to data race, which is why before decoded data can be safely consumed, supervisor must receive M-many successful completion messages from M-many worker threads.

Now I'm going to demonstrate whole parallel decoding process with the help of an example. Say, generation size is 3 i.e. 3 pieces to be coded together & each piece is of size 4 bytes. So decoder needs to receive 3 linearly independent coded pieces to be able successfully decode original pieces. Supervisor thread works on coding coefficient matrix of dimension K x 3, where K = [1..3] & 2 worker threads are responsible for managing two non-overlapping coded data submatrices, each of dimension K x 2, where K = [1..3].

After reception of every coded piece, three steps are performed in order on updated coding coefficient matrix by supervisor thread. And respective steps are also replicated on coded data matrix by two worker threads.

When first coded piece is received, supervisor thread finds it's the only row in coding coefficient matrix, which is why step {1, 3} can't be performed for this piece. Linear dependence check requires dividing row C[0] by pivot element at C[0][0] & it can be clearly understood that as this is the only piece received so it's indeed useful i.e. trivial case. Resulting coding coefficient matrix looks like.

After reception of second coded piece, this is how coding coefficient matrix & coded data matrix looks like.

Exact same row operations need to be performed on coded data matrix by two workers, which results into following. Note, these two worker threads are not synchronized. 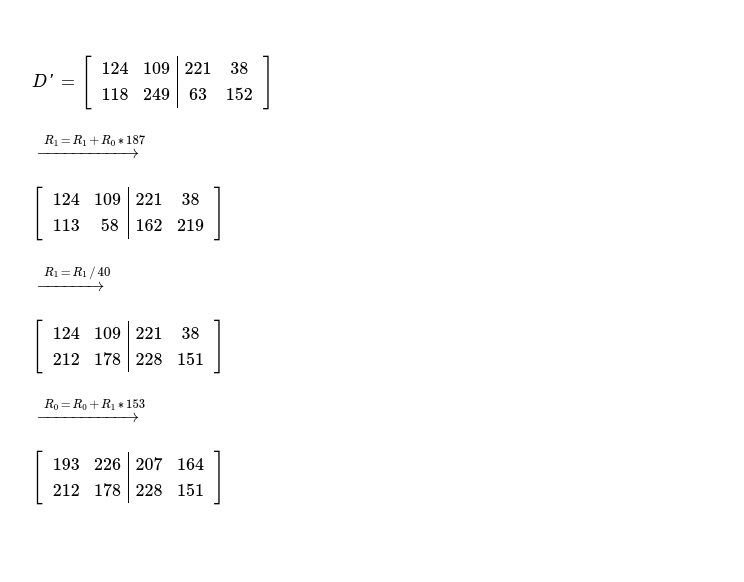 As it turns out, pivot element C[2][2] is non-zero i.e. third piece is linearly independent with other two pieces, I can proceed with step 2, where pivot elements are made 1.

And finally step 3, attempts to clean cells above pivot elements i.e. here C[2][2]. For zeroing cells above C[2][2], following sets of row operations need to be performed, which results into below coding coefficient matrix --- N x N identity matrix, denoting all pieces required for decoding data are received, as rank of this matrix = 3 = generation size.

For actually consuming decoded data, I need to wait for both worker threads to execute all pending row operations. After completion of all pending row operations in coded data matrix, original pieces are revealed --- ready for consumption by client application. Before worker threads stop, they must send one message to supervisor thread notifying completion of all tasks, in submatrix allocated to it. 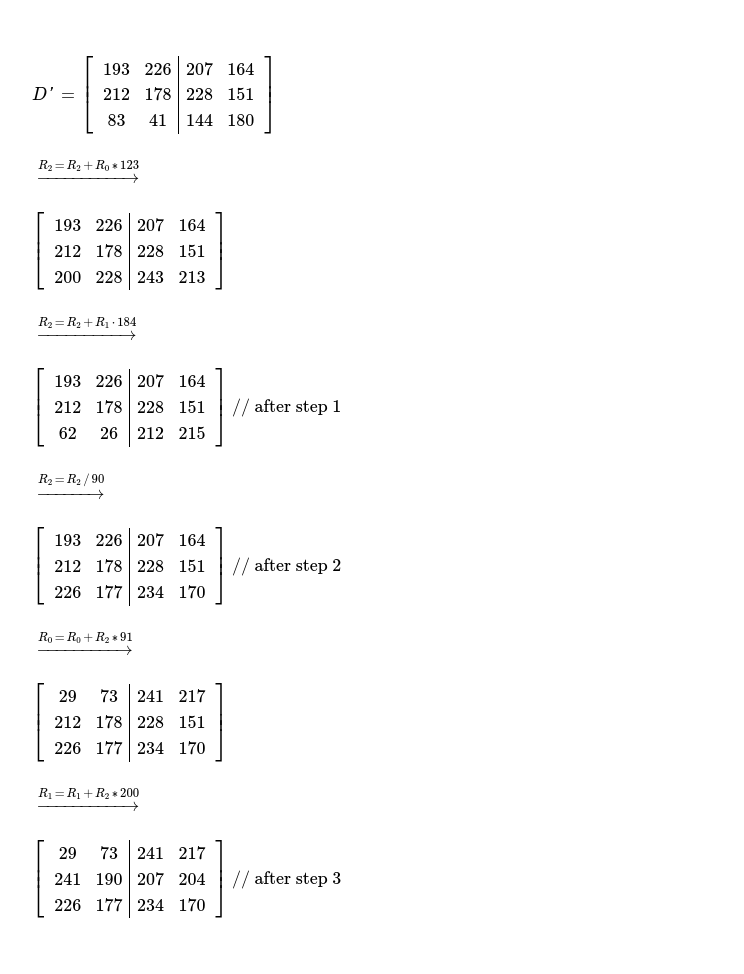 This way Parallel RDPD is able to harness power of multiple CPU cores available in most of modern machines, for decoding Random Linear Network Coded data with minimal corridination among all employed threads. As worker threads are not synchronized, they're free to proceed at their own pace, except at very end of decoding supervisor expects to hear from all workers, notifying it of completion of execution of all pending elementary row operations.

How good is Parallel RDPD compared to single threaded decoding algorithm ? After I complete implementation of Parallel RDPD in kodr & benchmark it I'll find that out.