For last few months I've been working at TCP level more often than I generally do. During this period I designed and implemented few systems where multiple participants talk to each other over TCP while following custom application level protocol. I learned the way most of TCP applications written in ( specifically ) Golang can be done in a slight different way so that applications don't end up spawning one go-routine per accepted connection --- resulting into thousands of active go-routines when talking to thousands of concurrent peers. Rather than handling each peer in its own go-routine, proactively attempting to read from socket & spending most of its time in blocked mode; keeping only one socket watcher go-routine which is responsible for informing any READ/ WRITE completion event happening on any of delegated sockets --- consumes way lesser resources. It excels at reducing scope of context switching by bringing possible go-routine count to minimal. As a result of it, Golang scheduler only needs to manage a few go-routines now. Previously scheduler had to orchestrate thousands of go-routines on N system threads. I ran some experiments and result was promising --- TCP servers able to easily handle 100k concurrent connections when following second approach.

The application I develop is quite simple but it captures the essence of a TCP application. It's a remote ( not necessarily geographically ) in-memory KV database, to which clients connect over TCP & maintain that connection throughout their life time. During their life time they do any of two possible operations in a randomised manner.

In both of the cases clients expect to hear back from server. In response frame VALUE associated with KEY is returned. For WRITE request, VALUE in response frame must be equal to what's sent in request frame. On server side all reading/ writing is done in concurrent safe manner --- by acquiring mutex locks. Only for write request r/w lock is held i.e. critical section of code, otherwise normal read-only lock is held --- allowing fulfilment of multiple READ requests concurrently.

Each message sent over wire is two-parts, where envelope carries operation kind i.e. {READ, WRITE} & how many more bytes server need to be read from stream to construct a structured message. Clients always expect to receive only one kind of frame in response.

For a READ frame, sent when client is interested in looking up VALUE associated with KEY, body just holds key, preceded with key length in 1 byte field. Notice, body length field in envelope is 2 bytes, allowing at max 65535 bytes of body, but in body actually 256 bytes can be written due to key length field in body being of 1 byte. This is done intensionally for keeping illustration simple.

Practically max READ frame size over wire will be

WRITE frame carries little more data, which is sent when client is interested in associating VALUE with some KEY, because it carries both key, value & each of them are preceded with respective length in 1 byte field. Same scene here, practically WRITE frame's body will be at max 512 bytes though it's allowed to be at max 65535 bytes theoretically, as written in body length field in stream.

Limits WRITE frame size will be

In response of READ/ WRITE request client expects to receive one RESPONSE frame, where VALUE associated with KEY is encoded, where length of VALUE precedes it, encoded 1 byte --- signaling client how many more bytes to read from stream to construct response. Good thing about response frame, it doesn't waste any space, just allows sending 255 bytes VALUE at max.

Model v1 is popular way of writing TCP servers in Go, where one listener go-routine keep listening on a host:port; accepts connection & spawns new go-routine for handling connection throughout its life time. This model respects seperation of concern well & operations happening on socket are easier to reason about due to clean structure. But one thing to notice, each go-routine alive for handling concurrent connections, spends a lot of its time in blocked state --- proactively waiting to read from socket.

Model v2 is slightly different than v1, where rather than spawning one go-routine per accepted connection, all accepted connections are delegated to one watcher go-routine, which runs one kernel event loop and learns about READ/ WRITE completion events on sockets being watched. Every now and then event loop informs watcher go-routine of READ/ WRITE completion events, providing with opportunity to take action on accomplished task and schedule next operation on socket asynchronously.

This mode of operation has some similarity with libuv --- which powers NodeJS's event loop. 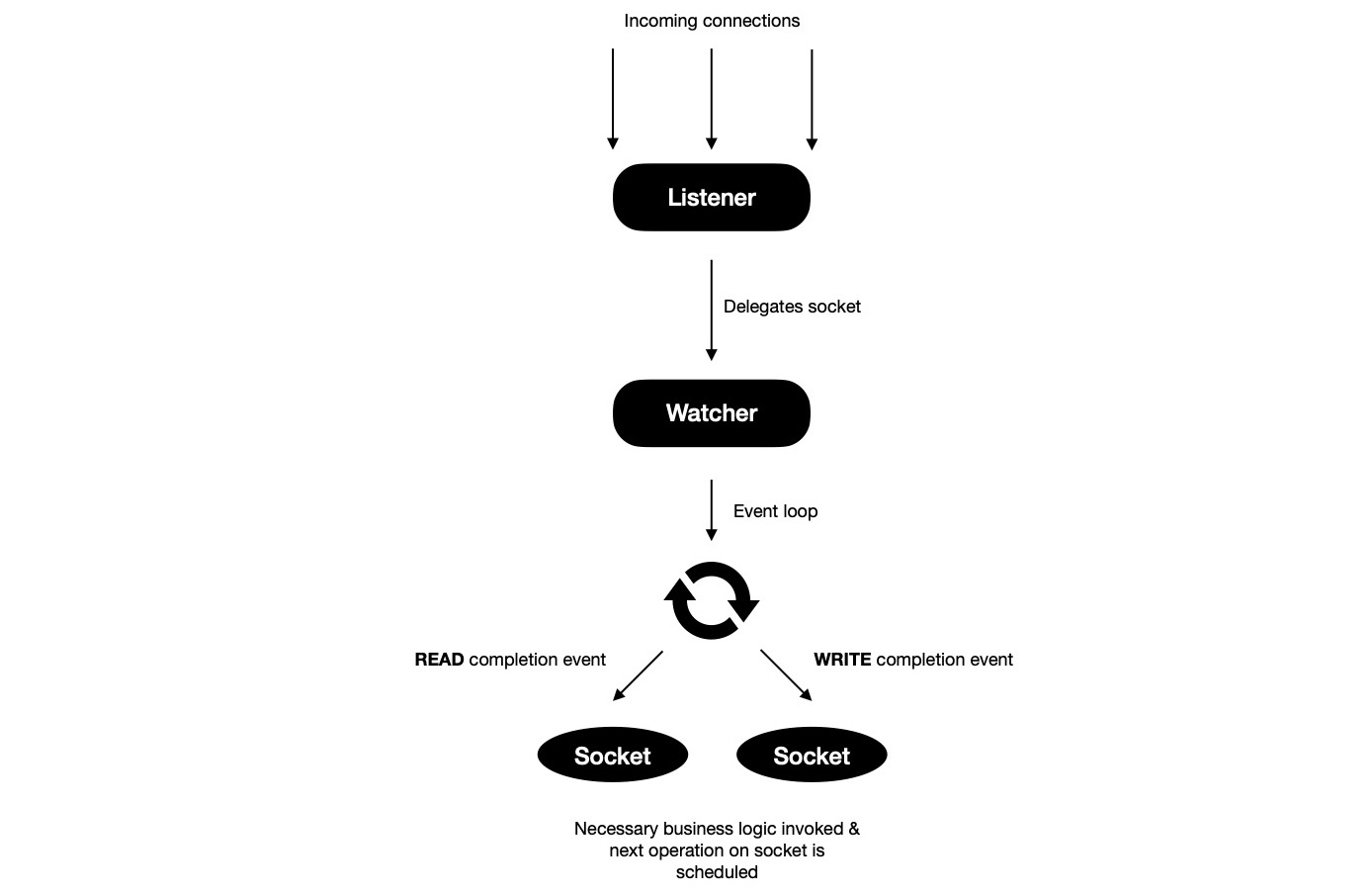 I'd call model v3 a generic version of model v2, where N-watcher go-routines run N-many kernel event loops and each accepted connection is delegated to one of these available watchers for rest of their life time. Whenever READ/ WRITE completion event ocurrs on some socket, event loop notifies respective watcher go-routine, which invokes handle{READ,WRITE} method to take action on completed event and schedule next operation on socket, to be completed asynchronously.

One problem I see with this scheme is, assuming peer connections are generally long-lived some watcher might end-up managing all those long-lived peers while some other watcher go-routine probably received those sockets which were unfortunately not long-lived, will manage few sockets --- creating imbalance in socket watching delegation i.e. hotspot resulting into bad performance. What I think can be done, rather than blindly orchestrating sockets using naive round-robin technique, better to keep one feedback loop from watcher go-routines, so that they can inform listener go-routine of their current status i.e. how many delegated sockets are they managing now ?, how many of them are active in terms of READ/ WRITE operation frequency --- rolling average over finite timespan ? etc., allowing listener go-routine to make more informed decision before it delegates accepted connection to some watcher. This brings in management flexibility. 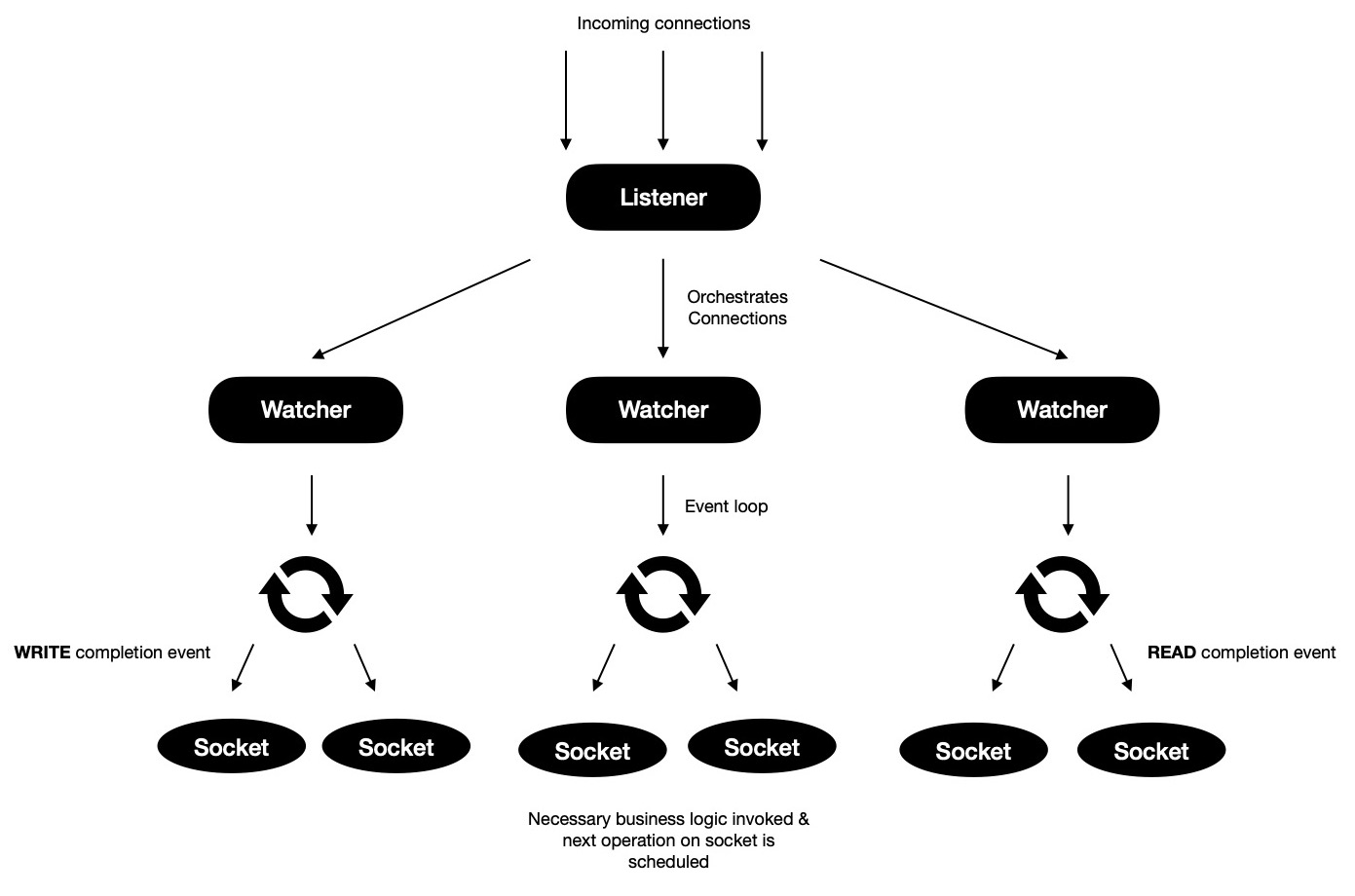 It's time to run these models on real mahine and collect statistics. I've prepared parallel benchmarking testcases, where in each round of benchmarking one client connects to TCP server and sends two frames in order. First frame is read request for some KEY, waits for response, consumes it ( if some other client has already set VALUE for that KEY ); then it sends write request with a KEY, VALUE pair, waits for response, expecting to see VALUE in response matching what it sent in write request. Each benchmark is performed 8 times, to get average statistics.

I do parallel benchmark of model v1 on two machines running GNU/Linux & MacOS where for each round takes ~34k ns on GNU/Linux, but it's relatively on higher side when run on MacOS ~45k ns.

For model v2, MacOS takes lesser time for each round than it took in model v1. But that's not true for GNU/Linux --- rather it almost doubled up.

In case of model v3, GNU/Linux and MacOS both of them has kept their trends intact --- for one average benchmark round completion timespan increases, for other it's decreasing, respectively.

Now I plan to stress test 3 models on both of GNU/Linux & MacOS platform with 8k concurrent connections, where each client connects to TCP server, sends read & write requests in order while waiting for their response in both of the cases.

When model v1 is stress tested, it completes lot faster on GNU/Linux, given it enjoys benefit of faster CPU.

Time required for completing stress testing with model v3 is almost unchanged for MacOS, but for GNU/Linux it's slightly increasing.

Go's trace tool is helpful in getting deeper insight into what happened when program was running. So I collect program execution trace when running test cases. These are collected on MacOS machine with Intel i5 CPU @ 2.4Ghz.

While looking for how major go-routines spent their time model v1, I found listener go-routine which accepts connections and spawns new go-routine for handling it, spends a major portion of time in blocked state --- which is understandable because it's waiting for new connection to arrive.

I look at model v2's execution trace. It has two major go-routines i.e. {listener, watcher}. Listener does same job in all 3 models --- wait for incoming connection; accept it; prepare connection handling phase ( different in each model ); keep looping, which is why network IO based blocking is evident in its trace.

When I look at model v2's watcher go-routine trace, it doesn't spend any time in waiting for network IO --- it makes a blocking call where it waits for accumulation of a few READ/ WRITE completion event from underlying kernel event loop, as soon as it's done, it starts looping over them and takes necessary actions. This single function is equivalent of what N-many handleConnection go-routine does in model v1. When scheduler wait column is checked in each of these traces, it's well understandable each go-routine spawned needs to be scheduled on underlying OS threads to actually run, and scheduling is not cheap when having 100k go-routines.

At last I take a look at trace of model v3, where I run 4 watcher go-routines each managing a subset of accepted connections. Listener go-routine's trace is similar to what I found in other models.

Downside of having more go-routines is scheduling cost --- here I run 4 go-routines with 4 different kernel event loop, subset of sockets are delegated to them, resulting into spending more time in scheduler wait stage. Also notice though there're 4 watcher go-routines ready to do their job, not all being used. It's because of the fact during test, when trace is collected, only one connection request is sent from client side, resulting into only one socket being managed by one of available watcher go-routines.

The problem I face is how to run 100k clients on my machine ? Given the fact network port identifier is of 16 bits, which allows me to run 65536 ( 1 << 16 ) clients at max. Leaving lower 1024 port numbers, I still need ~40k clients. It's all happening because I've only one IP address i.e. 127.0.0.1 . I can make use of some virtual networking technique, where I get a different subnet and multiple virtual machines are allocated IP address from that subnet. Each of those virtual machines run one copy of client application, actually to be more specific each of them run N ( < 65536 )-clients. This way I can easily get to 100k client target.

I start with model v1 --- total 7 containers to run, one for server, others for clients. I see CPU usage ~60%, suddenly it moves to ~100%. The memory usage is due to high number of key value lookup happening concurrently.

Similarly model v2 and v3 are simulated, where one TCP server manages ~100k concurrent connections, each client attempting to randomly read/ write some randomly generated key & respective value is returned back to them in response.

I note, each model is capable of handling 100k concurrent connection in simulated environment. Each of these models has its own benefits or downsides such using model v1 program structuring is easier to understand, also it's natual & familiar way of writing TCP applications in Golang; while using model v2, chance of context switching can be avoided by drastically reducing #-of active go-routines, but it's no silver bullet. On the other hand model v3 which is a generic version of model v2, is able to leverage power of more than one event loop, each managing subset of accepted connections --- sharded architecture, resulting into less mutex lock contention, given orchestration technique fits well.

For almost all standard TCP applications, model v1 is good fit, model v2 or model v3 ( with better orchestrator ) can be used when extreme performance is required, while paying relatively lesser cost.

I keep implementation powering these findings in this repository for future reference.
I plan to impose C1M challenge ( i.e. managing 1M concurrent connections ) on these models --- some other day I'll talk about it. Have a great time !