RLNC is a powerful construction for addressing several p2p networking problems. It can be used for attaining Min Cut Max Flow capacity of underlying network graph. It can work well in distributed fashion for network topologies which keep changing dynamically i.e. churn is high. Effectively solving coupon collector's problem in p2p CDNs. It seems to be a good candidate for delay & disruption tolerant network protocols too. There're several variations of how to code pieces. But I'm starting with full network coding, where I take a whole data chunk & apply coding on all pieces. 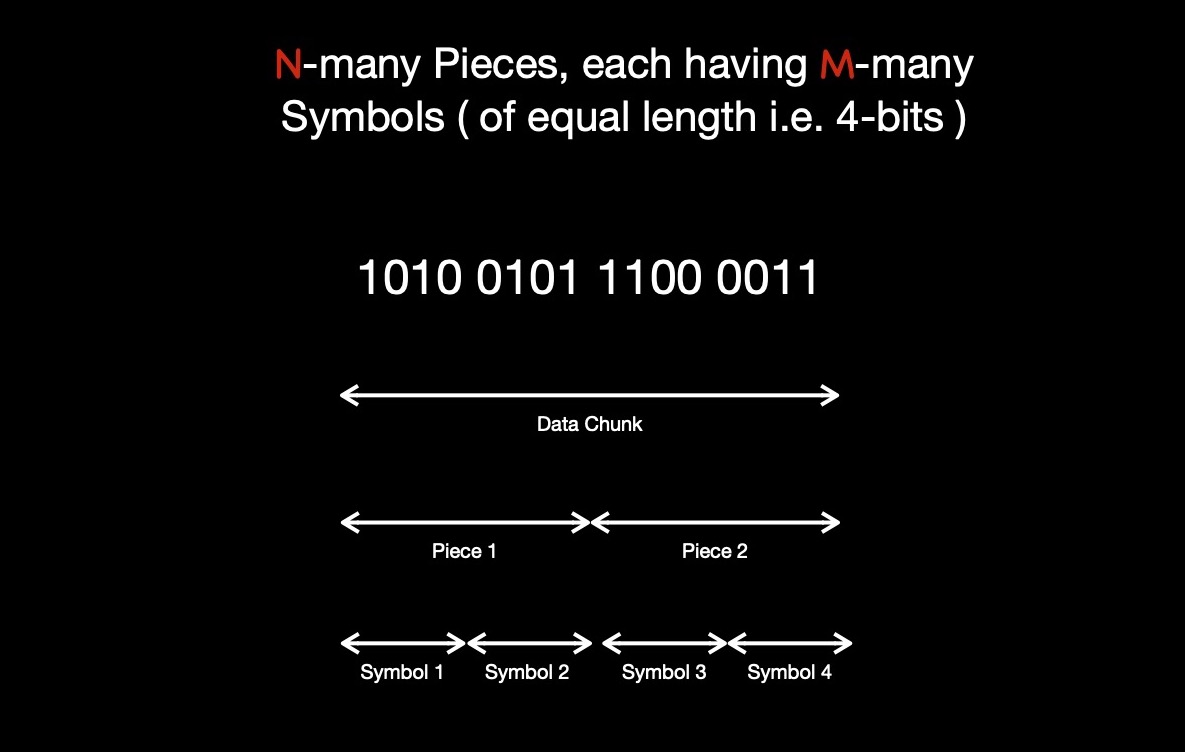 For performing coding, I interpret each nibble as element of some Galois Field. I choose to use GF(2 ^ 4) as the extension field of prime field GF(2). In extension field GF(2 ^ 4), there're 16 possible elements, each generated using following rule.

I use x^4 + x + 1 as irreducible polynomial for field operations. When I add/ substract two elements ( read polynomials ) of GF(2 ^ 4), resulting polynomial's degree can't be > 3. Addition/ substraction is simply XOR --- it's defined as. Modular division 2 is performed because allowed polynomial coefficient can't be > 1, for prime field GF(2).

But result of multiplication can increase polynomial degree > (m - 1), hence element may not belong to GF(2 ^ m) anymore. For bringing it back to GF(2 ^ m), I choose to modulo reduce it with irreducible polynomial for GF(2 ^ 4).

Irreducible polynomials behave like prime numbers, having only 1 & self as factors.

Inverse of polynomial in GF(2 ^ m) is defined as

For finding out P'1, I perform polynomial multiplication in GF(2 ^ 4) & obtain one coded piece 0b1011_1001. One point to note in coded piece construction is how symbols from different pieces are added together. 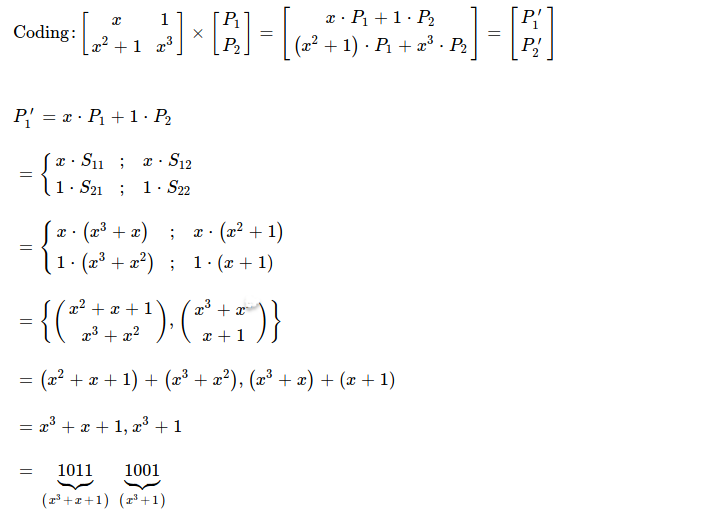 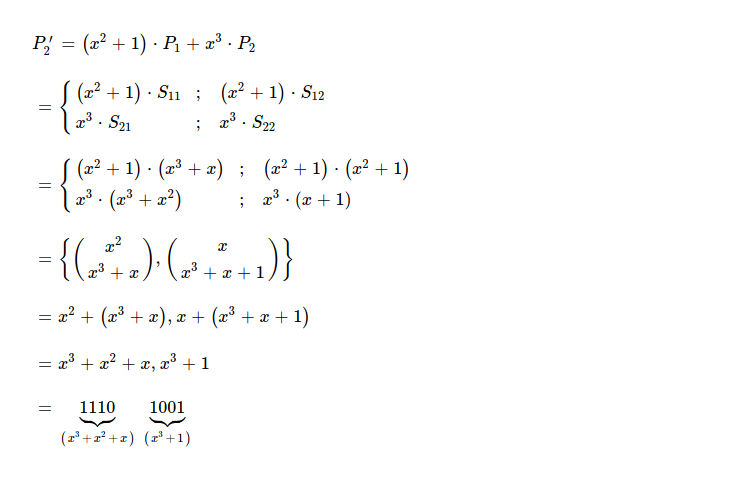 After recipient peer receives both coded pieces & respective coding vectors, I see figuring out what original pieces are, is a linear algebra problem. One thing to note here, while inverting coding matrix, GF(2 ^ m) rules need to be respected.

This is what piece decoding looks like from high level.

For finding inverse of coding matrix, I'm going to use Gaussian Elimination method. 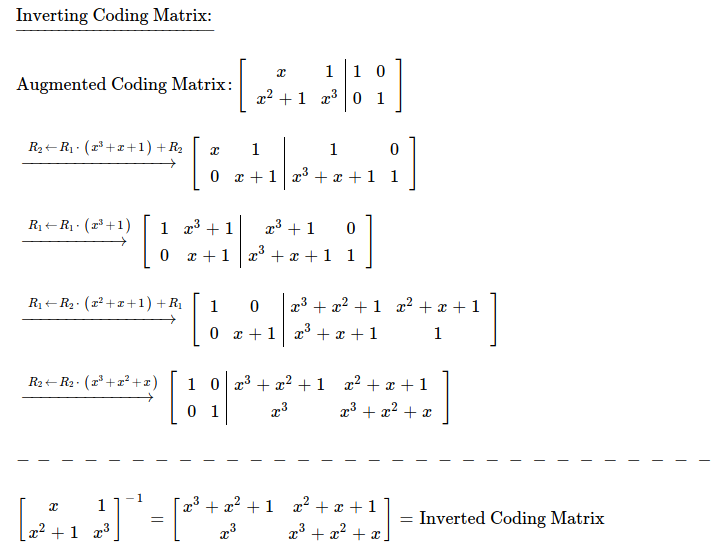 Now I'm going to plug inverted coding matrix into decoding flow, as a result of it, I get two equations for finding out values of P1 & P2 --- original pieces.

Solving equation for P1, decodes one coded piece. I get 0b1010_0101, which is exactly same as first original piece. 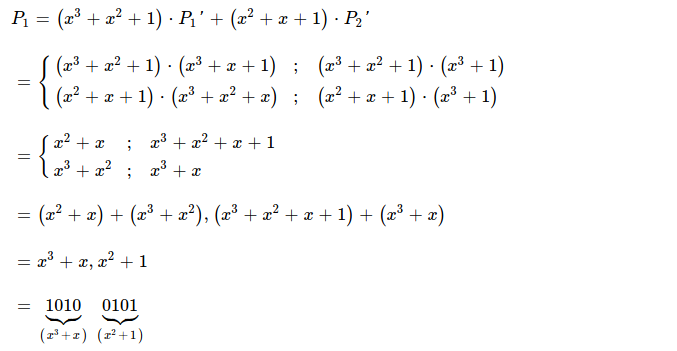 Solving for P2, gives me other decoded piece which also turns out to be same as original second piece. 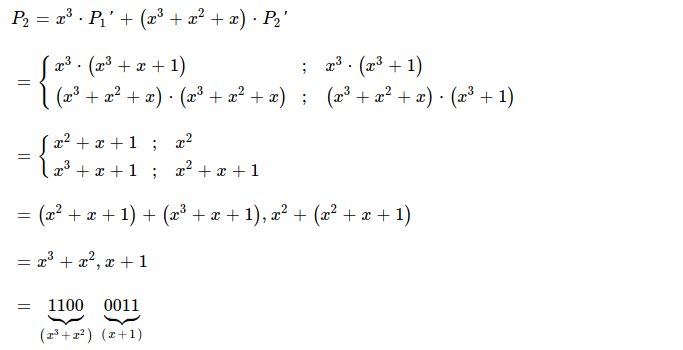 If I bring in one intermediate node, it doesn't need to get all coded pieces and then decode-encode, rather it can just re-encode available pieces by randomly drawing coefficients, while ensuring recoded pieces are actually associated with original pieces by multiplying newly generated coding vector at intermediate node with received piece's coding vectors i.e. coding matrix. It's a distributed coding protocol.

As next step, I plan to dig deeper into other network coding methods, while also prototyping for collecting statistics & getting whole picture clearer.